~ A short Biography by Carole Cuneo ~ 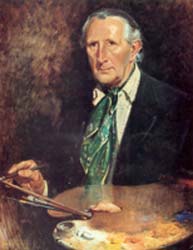 Terence Cuneo is a respected name among railway minded folk in this country (and many countries overseas) but to me, as a child, he was my beloved dad. If you were to ask me what it was like being an artist’s daughter, my reply could only be that it was brilliant !

Family life at home was so exciting, because we never knew what my father was going to do next. When we were children, he made my sister & I wonderful toys such as a life size roundabout, which stood in the garden for years.

Then there was a large pedal car which seated two children, like a racing car. However, the most exciting thing was the Gauge 1 model railway that ran around our garden, through tunnels and over bridges, which caused terrific excitement for family and friends of all ages.

……. ” It was wonderful ” …… these are indeed cherished memories.

That my father loved painting was always evident to my sister and I. Let me open up a little family secret for you. At the end of along day’s painting, he would haul his canvas to our bathroom and prop it against a wall, before relaxing in the suds with a glass of whisky, casting a leisurely but critical eye over his work. His meticulous indeed uncanny eye for detail made him a harsh self critic; Cuneo the artist was not easily pleased! But his love of painting was equally evident in the countless works he created and never more so than in his railway paintings.

Indeed, my father’s railway art is a dramatic history of the genre itself. He was a man blessed with dimensional thinking on a grand scale, and he was prolific – I doubt if even he could have told me exactly how many trains he had painted. To this day I am surprised (not to mention touched) at how many unlikely establishments and homes boast a Cuneo train on the wall.

But it was not just trains, which fascinated my father. He had a natural affiliation with engineering subjects – it would not be an exaggeration to say he felt a genuine passion for huge, powerful machines of any kind. Cars, jet engines, aircraft, tanks and other military machines – they were all grist to his mill and he loved them all. But this passion found particular and very special expression in his many paintings of not just locomotives, but the railway as a whole (especially its great bridges) and the men who worked the trains. His work has been used in every conceivable manner, from book jackets and model railway catalogues, to posters and jigsaws and even Royal Mail postage stamps!

As you look at these canvasses I am sure, like me, you will be struck by the vibrant living quality they possess. Indeed, my father’s life was one long adventure and his swashbuckling spirit shines through in his paintings. His uncompromising determination to ‘get it right’ meant that he sometimes took dreadful personnel risks for his art, whether hanging out of helicopters, balancing precariously on railway bridges or doing express trains between tracks of a busy main line.

My father had a very exciting life and his artistic talents attracted attention along the length of Whitehall and even Buckingham Palace. He was the official artist for the Coronation painting, for Queen Elizabeth II, in 1953 and this kind of ceremonial work meant that as children we were sometimes honoured to pose in all sorts of ermine robes and crowns while he sketched!

His love of the ‘iron’ horse was matched by an admiration for the four legged kind too, and he was commissioned by the Queen to paint regal equestrian portraits. There probably isn’t a military mess-room in the country which does not have at least one (and probably more!) of his paintings displayed on the walls.

The Cuneo Signature & Mouse are the property of the Cuneo Estate.